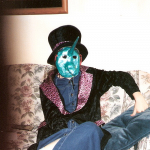 Hello!  My name is Kara. I am a Caucasian female, a proud American, and a strict Pentecostal Christian. The founder of this wiki seems cool, so I decided to join and share my stories on here too. I believe that well-written horror frightens yet intrigues. You feel afraid, but then you come back for more. Some things frighten me that don't frighten others, but then again some things frighten others that don't frighten me. I also think there are times whether or not something is scary depends on the circumstances. My friend once showed me some scars on his shoulder. They were really very small, and most people would think nothing of them, but since it was my beloved friend, and I knew the story behind them, they might as well have been huge, gaping, festering, open wounds. I have a mild case of post-traumatic stress disorder as well, so that can be a factor too. The two genres of horror I really respect are psychological horror and body horror. I don't like the splatterfilm type of horror, especially when it's just gore for gore's sake. I also think the scariest things happen in real life. I once saw a documentary about the portrayal of the Third Reich and the Holocaust in Hollywood film, and I literally had trouble sleeping for a whole week. The part in Schlinder's List (I think that was the film) with the little boy making a "cut the throat" motion to someone simply for being Jewish is more effective and a lot scarier than the cheap "scares" in a lot of horror films today.

I write to create atmospheric stories and flex my creative muscles, not to induce screaming nightmares or one-up anybody.

Stories Involving Other Characters from My Comics (9)

Hail and Farewell (My Deleted Stories)

Deleted stories happen to all of us, and I've decided to have a respectful in memoriam to my stories that are no longer with us rather than be a hateful crybaby about it. ~takes off hat~ It’s so hard to say goodbye to yesterday.

Videos of My Pastas

I'm very honored, and you all did great jobs. Thanks a million!

Here are some nice things people have said about my stories.

These are free for anyone to use as long as they give me credit.

Retrieved from "https://flamintales.fandom.com/wiki/User:Raidra?oldid=6155"
Community content is available under CC-BY-SA unless otherwise noted.